Pussy, Pussy Galore. Who were you expecting?

Part 3 in a 24 part series of secret agent ‘research‘, this is my third 007 film review. If you missed my last, you can read my review of 1963′s From Russia with Love.

Google ‘best bond movie’ and you’ll get a variety of opinions. Purists will tell you From Russia with Love (FRWL) is the superior film. And it’s no doubt in the top five. Contrarians will claim On Her Majesty’s Secret Service deserves consideration. Certainly George Lazenby was a more than serviceable one-time Bond. And the conclusion was a dour and emotional scene that is unparalleled in over twenty films. But we both know it’s Goldfinger don’t we? Of course we do.

Truth be told we owe a lot to FRWL. The second installment gave us Desmond Llewelyn as Q and our first proper Q branch briefing. It gave us Lois Maxwell as Money Penny. FRWL built the foundation that is Bond, but it’s Goldfinger where the brand was born. It’s Goldfinger you show your kids so they understand the soul and swagger of the genre.

What is it about Goldfinger that elevated the series? It starts with exceptional villains. Every good spy thriller has equal parts cat and mouse; good and evil. As good as FRWL was, its noteworthy villains were really just henchmen; extraordinary henchmen mind you, but certainly not criminal masterminds. While the specter of Blofeld loomed throughout the movie (see what I did there?), the lack of interplay with Bond starved the audience of what it always wants – a clash of the titular titans.

Keeping the villain behind the curtain is like seeing your favorite prizefighter in a tune-up match. To truly be the best, you have to beat the best. Otherwise, what the hell was Carly Simon singing about? No, not Warren Beatty. The other one.

A proper Bond villain is always a bit of a dandy.

When you want the perfect villain you cast a German actor best known for playing a pedophile – and they found their man in Gert Frobe. What Cubby and director Guy Hamilton didn’t know when they flew Frobe in for a casting call is that he didn’t speak English. One thinks someone would have checked this. Undeterred they loved what he brought to the role and decided to dub him in post production after several failed attempts speaking his lines in English. What’s alarming is that if you’re not paying attention they actually get away with it.

Gert nailed the part; bringing an arrogance and ruthlessness to the role that contrasted perfectly with his thin, but affable veneer. At a glance he looks like the kind of guy you’d see fastidiously washing glasses at an Irish bar. Upon closer inspection he’s more likely to strip you down and paint you head to toe in gold paint until your skin suffocates. Of note, skin doesn’t actually breathe, but it sure plays well as a deadly kink. I’m betting his safe-word is bullion. 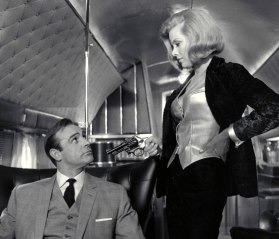 Goldfinger is no slouch in the henchmen department either; offering up two of the best in the series. And henchman (hench-woman?) doesn’t exactly do a pilot and judo expert like Honor Blackman’s Pussy Galore justice.

She’s the ultimate femme fatale; initially Bond’s doom and later his salvation. The secret was in the casting. Blackman, the oldest of all Bond girls at the ripe age of 39, was already a star from the British TV series The Avengers. To quote producer Cubby Broccoli: “It was Guy Hamilton who suggested Blackman to play Galore. All her crinkly leather action and shoulder-thows she did on the Avengers virtually clinched it for her to tussle with James Bond.” Pussy was beautiful, stylish, smart, and dangerous – every bit Bond’s equal.

Naming a character ‘Pussy’ wasn’t without controversy. The producers considered renaming her to “Kitty” but managed, with a spot of ‘wining and dining’ to get the name past censors. The obvious double entrendre also fostered what became a time-honored tradition for female characters including – Plenty O’Toole (my personal favorite), Dr. Goodhead, Octopussy, and Xenia Onatopp. In a fine send-up Bond girl names were expertly lampooned in two Austin Powers films with Alotta Fagina, Ivana Humpalot, and Felicity Shagwell.

Goldfinger didn’t have Pussy alone mind you. He had the assistance of a Korean Olympic weight lifter Harold Sakata – known as Odd Job. While Odd Job’s name implied a versatility of talent, he did little other than caddy and kill people. I imagine if you’re an eccentric madman hell-bent on controlling the world’s gold supply, these are important attributes in a servant. Odd Job was a man of one word (seriously, one), but like many henchmen that would follow had a certain flair about his weapon of choice- a razor lined bowler hat. Not exactly what Rene Magritte had in mind.

Goldfinger also marked the beginning of the end…of death by conventional means. Not content to shoot simply shoot Bond in the head, Goldfinger attempts to cleave him, suggestively crotch first, with an industrial laser. Thus initiating one of countless attempts by a super villain to kill Bond via extravagant means. A bullet to the head? Preposterous. Anyone can do that.

I’d be remiss if I didn’t acknowledge the Welsh siren who proved to have the Midas touch for Bond theme songs. While technically a one hit wonder, Shirley Bassey had a tremendous career stating – “I suppose I should feel hurt that I’ve never been really big in America on record since Goldfinger…but, concert wise, I always sell out.” Bassey would go on to sing title tracks for Diamonds are Forever and Moonraker.

Finally, Goldfinger also gets personal. Goldfinger isn’t just another assignment for an agent who’s licensed to kill. It’s also a reckoning. After seeing not one, but two gorgeous Blonds killed on his watch, it’s clear Bond’s motivations are driven more by a sense of vengeance than duty. I suspect this is an attempt at adding a redemptive quality to the character for Fleming. If you’re going to create a protagonist who’s, frankly, a bit of an ass and world class womanizer, you should at least occasionally let him don some slightly tarnished armor.

Sartorial splendor, out-moded mode: still in the peak of early 60s fashions Goldfinger hits many of quality notes in the fashion department (notably Bond and Pussy), but doesn’t live up the runway material of it’s predecessor – FRWL. 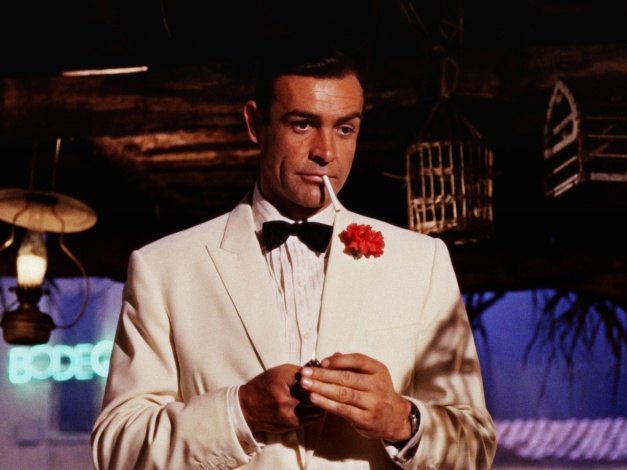 Just after shedding his wet suit. The carnation is a nice touch.

Fortunately for Pussy, the attack on Fort Knox was the weekend prior to Labour Day.

Contextual matters: Given the rapid release of the first few films little had changed, zeitgeist-wise, when Goldfinger premiered. The cold war was in full swing and the civil rights movement roared. Of note, Khrushchev was deposed and Congress authorized war against Vietnam.

Wrong side of history: Surprising few, the producers made the fact that Pussy was a lesbian less obvious than in the book – “Spare me your charms Mr. Bond, I’m immune.” Her poise and confidence, to say nothing of her Judo skills (Honor was a brown belt) belied what was supposed to be an abused women. In the 1960s you see, lesbians simply hadn’t met the right men yet.

Not exactly progressive stuff, but then for the 60s merely implying a core character was a lesbian was progressive in and of itself. Of note, this is the second Bond film with a lesbian lackey; making one wonder if Fleming was perhaps a little obsessed.

Inspirational moments: Without question, the opening scene is one of Bond’s best. It lacks the wow factor of later films which fell prey to needing to perpetually top themselves in extravagance, but makes up for it with swagger.

Bond sneaks into an oil refinery using SCUBA and a seagull decoy on his head (somehow this works). He dispatches a security guard, places the explosives, and strips off his wet suit to reveal a white tuxedo which he even manages to festoon with a red carnation. He walks away, arrives at a nearby bar, and checks his watch just as the refinery explores. Not a bead of sweat, never a moment’s hesitation, nor a glimmer of doubt.

So, sign me up for SCUBA lessons. An agent’s training is never complete.

Best lines: Once again, Goldfinger doesn’t disappoint. With a host of fantastic lines (there’s no way to chronicle them all here), Goldfinger threads the needle perfectly; bringing Bond’s dry wit to the forefront whilst avoiding the groaners that would taint the series in later films.

Pussy: My name is Pussy Galore.

Bond: I must be dreaming.

Bond: Do you expect me to talk?

Goldfinger: No, Mr. Bond, I expect you to die!