And then this happened….

I’m officially licensed to carry a concealed weapon in Washington.

Just a few months ago I would have classified anyone with a concealed carry permit as a whack job or a gun nut. And now I’m, literally, a card-carrying member. Let’s retrace a few steps to see how this happened.

Combat training is one of the important competencies on the list. It’s also the item du-jour so it’s receiving a fair bit of attention on the blog. When I started toying with the idea of getting my permit it was a lark; a process that I thought would generate good material. And while that’s true, it’s what I wasn’t prepared for that’s more interesting. I really enjoy shooting.

From the moment I started my first intro class, I knew I’d be back and I knew I’d be a gun owner. Oddly enough it reminded of my reaction to my first opera – it immediately resonated. I think it’s just one of those things that you either enjoy or you don’t. Some things you can cultivate a taste for over time, like a peaty scotch, others more immediately visceral. My first opera you ask? Tosca at the Hungarian State Opera House in Budapest. Tosca, you may recall, was the opera featured in Daniel Craig’s second Bond film – A Quantum of Solace. Never miss a Bond reference, or a pretentious cultural event, and certainly not both.

Dan who’s appreciably (and admittedly) more measured than I, saw the twinkle in my eye after class. He knew something was afoot, but I don’t believe he envisioned me taking things this far. Subsequent agent-related internet research yielded a treasure trove of course work wherein I can learn long-range exercises, barricade drills, movement, shooting while moving, low-light tactics and moving targets. And while you may be thinking such classes are only available in Texas, I can learn all these skills right in Bellevue, Washington – just miles from Bellevue Square. I can see my weekends now. “What do you guys do over the weekend?” “Us? We hit the Kiehls counter and then I waited in the car while Alex went through about 150 rounds. How about you?”

What these classes do require, in addition to my own gun, holster, and extra magazines, is a concealed carry permit. So, off to Google I went. It’ turns out it’s remarkably easy to get a carry permit in Washington although it might sound a tad daunting at first. You cannot apply online, you have to visit your nearest police department, pay a nominal fee, and get fingerprinted. If my Google history hadn’t set off an NSA alarm before, surely this would do the trick.

Fortunately, the Seattle Police Department (SPD) HQ is just a 15 minute walk from work. So, I made my way down one Friday afternoon after ducking out for lunch. It was a nice Fall day and suitable for a brisk walk. On the way down I couldn’t help think about two questions. First, what in the hell was I doing? And second, how is this going to work? Will I have to approach some intimidating  tribunal to request the proper forms in triplicate? Would I be challenged on why I need such a permit in the first place and discouraged right out the door? What I found was astonishing.

Welcome to the SPD. Do you need to conceal a weapon?

There are two sets of double doors to the SPD HQ. After walking through the first set I immediately encountered a sign – concealed carry permits to your left behind the brown door. Wow. The only sign on the interior door is for people like me. If that’s not an indication of how many people carry, I don’t know what is. I make my way into the office and am suddenly at the equivalent of the DMV. There’s a couple waiting already. I get the sense that they don’t mind. From the look of them, their dance card is relatively free for rest of the day.

There’s no one on the other side of the glass, nor any indication of when someone will return. So, I wait. 10 minutes later, when the two clerks arrive, they busy themselves behind the protective glass (bullet proof?). They sort papers, talk on the phone, without a hint of acknowledgement that we’re waiting. Not a glance, not a ‘we’ll be right with you’ or even ‘just a moment please.’ Nothing. I find this a tad irritating. I realize issuing concealed carry permits is probably not a career aspiration of anyone, but why should one dispense with common courtesy? 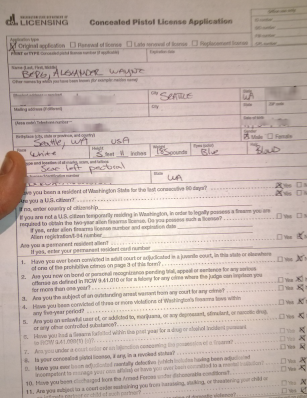 When it’s my turn I realize this is not going to be a one-and-done experience. If you want a concealed carry permit state and federal forms await. There’s the standard information of course, social security, home address, age, etc. However, there’s a good dose of background checking  as well (which I fully support). Had I been convicted of a felony? Have I renounced the United States? Ever been convicted of spousal abuse or stalking? And, the only one that was really surprising, do I have any identifying marks? It occurs to me that my NSA jokes are actually spot on. My fingerprints will be on file with the FBI and they’ll know I have a scar on my left pec. Fabulous.

I carefully fill out the forms and hop in line again. After checking my forms, taking my $56, and confirming again that I’m not stalking anyone, it’s time for fingerprinting. Having never been to jail (a banner achievement) this is a first for me. It’s not the big blue ink pads from Barney Miller. It’s conducted as a special scanner and kiosk – and a poorly designed one at that. I’m instructed to leave my hand limp and to stare into the distance. As I resist the urge to utter any number of jokes that would not have gone over well, Frau Bureaucrat gives me some rather stern instructions on how to roll my fingers. Just when it seems I’ll never escape her grasp, I’m offered single pump of Pu-rel. I accept my sanitizer, and make my way for the door. My permit will arrive within 30 days. I’m free to laminate if the spirit moves me.

And there you have it. It’s just that easy. No supporting rationale needed, no evidence of training, just an hour of time, my fingerprints with the feds, and little over $50. I can shop visit the Metropolitan Market for more cave-aged gruyere whilst carrying a handgun in my pocket.

God bless America. Am I right?